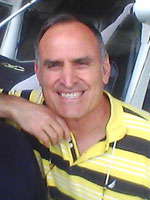 Dan has worked with us since 2009 when he first ran the Brigade Air curriculum in his church in NC. Since then, he has directed many of our aviation camps in NY and OH, and helped raise funds for the ministry.

Dan has been professor of Math at the University of North Carolina for many years, and has authored seven books.

He received the A. Scott Crossfield Aerospace Master Educator Award in 2004, the Aerospace Educator of the Year for North Carolina Award in 2005, and the Civil Air Patrol’s highest award for senior members, the Gill Robb Wilson Award in 2013.